What is Appalachian Square Dancing

The word “Hoedown” comes from the time of American slavery.  The slaves did not understand our English language, but they quickly learnt when to go to work & when they could finish for the day.
Most of the work was tending to crops and they used a tool called a hoe.  When they were told they had finished for the day they would lay the hoe down and do a dance of freedom.
This was an individual dance with each person doing their own dance; it is also the first form of break dancing.  An Internet search for the definition now shows it as “a social gathering at which lively folk dancing takes place”!

When the New Settlers went to America they took with them many customs and dance styles. The main influences came from the Germans, Irish, Scottish, French & English, who relocated for a new life due to religious persecution, politics, war or forced immigration (bond–servants or slaves); along with influences from Black Africans & Cherokee Indians. When they reached the Appalachian Mountains they were finally free and could celebrate and dance in peace.

Each of these nationalities had their own version of ‘Step Dancing’, and ‘Set Dancing’. Let’s quickly explore what these are:

Step Dancing: In some countries their unique traditional form of ‘Step’ dance continues today, in others it has developed into a dance form similar to the basic clogging steps we know. It is a percussive form of dance and the placement of feet are  important – it also usually keeps time with the beat of the music, sometimes on the ‘up-beat’ and sometimes on the ‘down-beat’ depending on the country. (Note: that Clogging in some form has been around since the reign of Caesar Augustus – 2000 years ago)

Set Dancing: This is where dancers stay in a particular pattern while dancing or perform set moves (like the ‘patterns’ that marching bands perform today).  You may be familiar with the terms – Quadrilles, Sicilian Circles and Square Dancing - these are all forms of ‘set’ dancing.

So when these nationalities got together to celebrate life – naturally they all wanted to dance and as a result, all the various ‘Set’ dances as well as the ‘Step Dancing’ evolved into a style known as Appalachian Square Dancing (ASD) - it all got amalgamated – you see it is more fun if you do clogging steps while making set patterns and have a caller telling you what to do. It was how people celebrated their family units and their freedom.

To this day many native Appalachians consider clogging and square dancing to be the same dance.

Of course variations started to develop and the style of clogging can be slightly different in different areas, some are: a smooth step (like an ice-skater); running steps (on the balls of the feet that is a bit faster); and buck & wing (a male and female courtship dance), but always FREESTYLE (the Cloggers choose the steps they do to the music – though they still need to keep in time with the music).

Appalachian Square Dancing  was traditionally done to live music, with a caller advising the movements like “Thread the Needle”; “Rip and Snort” and “Sugar on the Floor” while they added some ‘patter’ (a little story along the way). Dancing is done to 2/4 time (with a range of 110 beats to 160 beats per minute) which is different to the 4/4 time we would usually dance to in Clogging Clubs around Australia.

So ASD is the one of the purest forms of clogging, and you will have the chance to learn how to do it at “Heeler’s Hoedown” Nov 2017 in Orange NSW, when we hold a weekend workshop to explore how it all started back in Appalachia. There will be live music and we will learn Flatfooting, Buckdancing and Appalachian Square Dancing – all to live music.

Judy Jones (Bluegrass and Traditional Country Music Society of Australia – BTCMSA) and our very own Vickie Dean have experience in this style of dance and will be some of the tutors over the weekend. 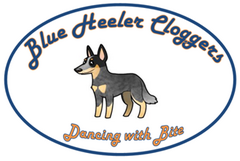